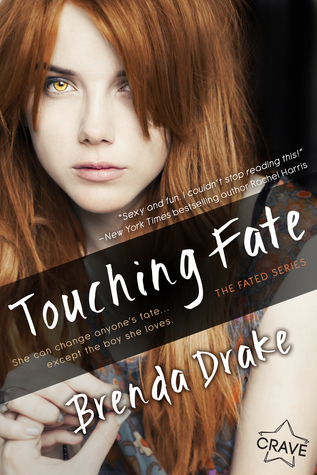 Aster Layne believes in physics, not psychics. A tarot card reading on the Ocean City Boardwalk should have been a ridiculous, just-for-fun thing. It wasn’t. Aster discovers she has a very unscientific gift—with a simple touch of the cards, she can change a person’s fate.

Reese Van Buren is cursed. Like the kind of old-school, centuries-old curse that runs in royal families. Every firstborn son is doomed to die on his eighteenth birthday—and Reese’s is coming up fast. Bummer. He tries to distract himself from his inevitable death…only to find the one person who can save him.

Aster doesn’t know that the hot Dutch guy she’s just met needs her help–or that he’s about to die.

But worst of all…she doesn’t know that her new gift comes with dark, dark consequences that can harm everyone she loves.


Shockingly, considering my recent mid-series reads, Touching Fate is not a book in the middle of a series.  After reading so many books where I was missing previous books, getting to read the first book in a series was a bit weird. ;P

Drake does a fantastic job of creating just enough tension to counter balance the shenanigans between Aster and her sisters, and Reese and his friends.  I did feel that the romance between Aster and Reese developed entirely too quickly from their initial meeting.  Other than my nit picky want for a lengthier romance, Touching Fate is fantastic.


I had a blast reading this book!  Drake weaves a fun twist to the cursed first-born son plot and adds a young woman who is unaware of her power to change a person’s fate.  Packed with magic, an adorable romance, and suspense, Touching Fate has definite beach read potential.

-Digital ARC provided by the publisher via NetGalley, in exchange for a review
Posted by Unknown at 10:00 AM