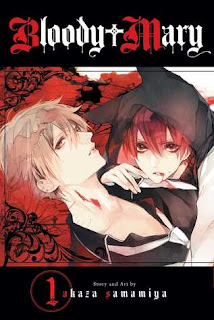 “Bloody” Mary, a vampire with a death wish, has spent the past 400 years chasing down a modern-day exorcist named Maria who is thought to have inherited “The Blood of Maria” and is the only one who can kill Mary. To Mary’s dismay, Maria doesn’t know how to kill vampires. Desperate to die, Mary agrees to become Maria’s bodyguard until Maria can find a way to kill him.

“Bloody” Mary is not your typical vampire. He can withstand sunlight, holds a reflection in mirrors, refuses to drink blood—and wants 17-year-old student and priest Maria to kill him. But to Mary’s dismay, Maria doesn’t know how to kill vampires. Desperate to die, Mary agrees to become Maria’s bodyguard until Maria can find a way to kill him at last.

It's been ages since I picked up a volume of manga, so when I saw the opportunity to read Bloody Mary I jumped.  This manga is very much what I used to devour like candy in high school, but maybe I've fallen out of range with this genre/style.  Because while I really liked the art style Samamiya works with, and Maria's characterization, I found the overall story line to be rather bland, and Mary's characterization quite two dimensional.

If I stumble across volume two, I will definitely give it a read, just to see what's happened to Maria; however, it's not something I'm putting in my calendar to run out for on release day.  Still an enjoyable read though.

-Digital ARC provided by edelweiss, in exchange for a review.
Posted by Unknown at 10:00 AM