"I'll thee protect from all the story's ghosts, for I'm the one who'll thrill they soul the most." 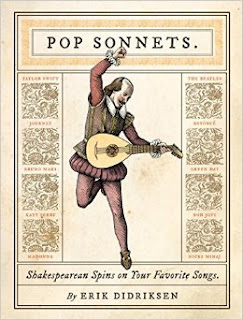 The Bard meets the Backstreet Boys in Pop Sonnets, a collection of 100 classic pop songs reimagined as Shakespearean sonnets. All of your favorite artists are represented in these pages—from Bon Jovi and Green Day to Miley Cyrus, Beyoncé, and beyond. Already a smash sensation on the Internet—the Tumblr page has 20,000+ followers—Pop Sonnets has been featured by the A.V. Club, BuzzFeed, and Vanity Fair, among many others. More than half of these pop sonnets are exclusive to this collection and have never been published in any form.

I love Shakespeare in all of his wonderful, iambic pentameter.  I've had the privilege of growing up surrounded by a father who believes in the power of the written and spoken word; I'm even named after one of Shakespeare's characters.  So it was pretty much a given that I would devour this collection of reimagined pop songs, and I wasn't disappointed.

Didriksen does the Bard proud with his creations.  Every song is a fun adventure; whether you're familiar with the song, or not.  I particularly enjoyed trying to guess which song each sonnet was based off of as I read them.  Yes, some of the sonnets were more well rounded and composed than others, but all of them together made for an entertaining read.

This is a book I would like to add to my library, and one which I can see myself picking up at random moments to read a sonnet or three.

-Digital ARC provided by NetGalley, in exchange for a review.
Posted by Unknown at 10:00 AM