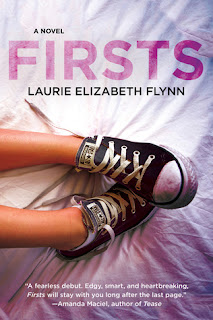 
Seventeen-year-old Mercedes Ayres has an open-door policy when it comes to her bedroom, but only if the guy fulfills a specific criteria: he has to be a virgin. Mercedes lets the boys get their awkward, fumbling first times over with, and all she asks in return is that they give their girlfriends the perfect first time- the kind Mercedes never had herself.Keeping what goes on in her bedroom a secret has been easy- so far. Her absentee mother isn’t home nearly enough to know about Mercedes’ extracurricular activities, and her uber-religious best friend, Angela, won’t even say the word “sex” until she gets married. But Mercedes doesn’t bank on Angela’s boyfriend finding out about her services and wanting a turn- or on Zach, who likes her for who she is instead of what she can do in bed.When Mercedes’ perfect system falls apart, she has to find a way to salvage her reputation and figure out where her heart really belongs in the process. Funny, smart, and true-to-life, FIRSTS is a one-of-a-kind young adult novel about growing up.

Firsts presents an occasionally harsh and uncomfortable view of teenagers in today's world.  Pulling away from the more common let's pretend teens don't have sex unless they're going to be together forever theme, Firsts dives feet first into a more realistic take on sex and teenagers.

I feel Flynn made a courageous choice to write a novel which tackles everything from casual sex and forever romance, to true friendships and the fake versions of said friendship that frequently form alongside the truer ones.  It was a refreshing take on contemporary YA literature.

Main character, Mercedes, was a wonderful blend of confidence and insecurity which made her come off as very, very real.  She's the kind of girl I feel would come off as confident, and a bit self-centered on campus; unless you really knew her, then she'd be a bit more fragile.  Unfortunately for everyone Mercedes knows, she doesn't exactly allow anyone to see beyond the outward mask she's built up until everything starts to fall apart on her.

Every character was a well written, pivotal part of the overall story.  Even the one who started off as a character I thought would be a favorite of mine, and ended the novel as the character I hated the most and want to hit where it would do the most damage.  Seeing as I want to beat the character I'd initially called my favorite, I have to say that my favorite was Faye.

Faye comes in as a newcomer to both Mercedes' high school, and the novel, partway through.  And she is a fantastic, take no bullshit, girl power lady.  Loud, and open, she immediately takes a liking to Mercedes, and spends the rest of the story chipping away at the wall built up around Mercedes.  She's especially important as Mercedes' world explodes into pieces.

My one complaint with Firsts is the plan Faye and Zach come up with to take the school's attention off of Mercedes.  I mean, really?  It felt contrived and totally fake compared to everything else Flynn brought us through.

End result, I really liked this book and its cast of characters.  I will be adding this to my library when it hits shelves, and putting it alongside my Ellen Hopkins collection.

-Digital ARC provided by NetGalley, in exchange for a review.
Posted by Unknown at 9:15 PM