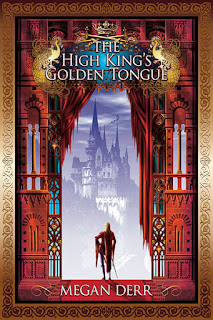 Prince Allen has trained his entire life to follow in the footsteps of his illustrious mother, who has made their kingdom one of the wealthiest and most influential in the empire. For the past few years he has trained to become the new consort of the High King. The only thing no one prepared him for was the stubborn, arrogant High King himself, who declares Allen useless and throws him out of court.High King Sarrica is ruling an empire at war, and that war will grow exponentially worse if his carefully laid plans do not come to fruition. He's overwhelmed and needs help, as much as he hates to admit it, but it must be someone like his late consort: a soldier, someone who understands war, who is not unfamiliar with or afraid of the harsher elements of rule. What he doesn't need is the delicate, pretty little politician foisted on him right as everything goes wrong. Publisher note: this is a highly expanded, completely re-written version of the free short that was previously available under the same title.

I adore Megan Derr's stories, and have for quite a number of years.  There's just something about the way she can bring the characters and worlds to life, that gets me every time I pick something of hers up.  And this expanded version of a short story I loved did not disappoint my not so inner Megan Derr fangirl.

Derr does a wonderful job of taking her short story and turning it into a full length novel.  It was definitely worth 'suffering' through her in progress tweets to see more of Allen and Sarrica.  Even more so, because this time around we got to see not only the actual disastrous first meeting between Sarrica and Allen, but we also were given insight into Sarrica through the addition of his point of view; which I really enjoyed, because it made him more human, and less just ass like.

Further, I liked the fact that the cast of characters grew to give us a more detailed picture of both Rene and Lesto.  And Tara.  I love Tara, he's such a breath of fresh air to the more serious characters.

Since this is a rewritten short story, I did know the main plot points going into this book.  However, there was more than enough new material, and added subplots to keep me guessing.  I'm also ridiculously excited to read the story Derr has in the works for Lesto, because damn does that man need a story of his own!

I do wish there had been a bit more information to explain the strong hints towards mpreg.  Or why some families have their own children, while others choose to use 'dames' to provide their lines with the necessary offspring.  It was very refreshing though, to be transported to a world where gender wasn't much of an issue in marriage or childbirth.  Hopefully, Derr will give us an opportunity to explore more of this world with her; and not just with the forthcoming The Pirate of Fathom's Deep.

Once I've got a place of my own, and not a room in my mum's house, this will be one of many titles I add to my library's shelves for future rereadings.

-Digital ARC provided by Netgalley, in exchange for a review.
Posted by Unknown at 10:00 AM